“Let me, O let me bathe my soul in colours; let me swallow the sunset and drink the rainbow.” – Khalil Gibran.

Colour can both affect and create mood. Those in the field of Colour Psychology may go further in citing colour as an influencer of human behaviour. This is an area of Psychology often viewed with scepticism. After all, colours can have different associations in different cultures; these do not appear universal. Indeed, some languages, for instance, do not distinguish between blue and green in their vocabulary (in another favourite quote here, Keats called blue the ‘gentle cousin of the forest-green…’), whilst, unlike English, some tongues use separate words for ‘light blue’ and ‘dark blue’. Nevertheless, we have become accustomed to the notion that red evokes energy; we associate blue with cool logic; yellow with optimism, green with harmony… And so on.

This strategy seems beloved of those who work in Marketing—using red to energise and motivate, purple to denote luxury brands, blue for strength and reliability (often used in social media branding)…

Certainly, colour is knitted into colloquial language – in English at least, when angry we ‘see red’ (evidently because as the ‘hot’ colour of blood, red is a stimulant that evokes strong feelings like rage); when we’re sad we ‘feel blue’ (apparently first employed in literature by Washington Irving in 1807 as a synonym for sadness, derived from having the ‘blue devils’, which is to say sensing a menacing presence.) Someone ‘green’ is naïve and gullible, presumably because of that hue’s association with new and immature growth.

In fictional writing, choices of, references to, and descriptions of colour can be a vexed matter. There may be times when a simple ‘red’ or ‘blue’ may suffice, just as there may always be a wise moment to use the simplest and most direct language available. But often we want to go further. We want to be vivid in our images, to establish atmosphere, pull the reader in and trigger a reaction by using specific imagery, or provoke a response through, for instance, simile and metaphor.

Colours do not have exact synonyms—‘scarlet’ and ‘crimson’, for example, are not the same, and are not precise alternatives for ‘red’. So the writer may search and search for the right shade and linguistic device, and in doing so, seek to convey a certain truth. Should that be burgundy or chilli, ruby or scarlet? The bright red of a hawthorn berry or featuring the gleaming depth of a garnet?

Then too colours can be symbolic, they have associated images or emotions, such as the wintry spikiness of the hawthorn, the richness, complexity, or indulgence of a garnet or ruby, or the heat and spice of chilli.

On the radio the other day, I heard someone mention Werner’s Nomenclature of Colours, written by Scottish botanical painter Patrick Smye and based on the work of German mineralogist Abraham Gottlob Werner. Published originally in 1814 (an 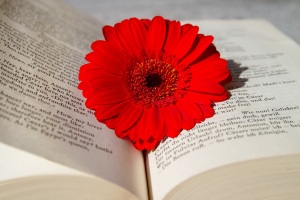 d so pre-dating the Pantone colour matching system by almost 150 years), as its name indicates, the book classifies the colors of the natural world in detail. Describing the slightest of chromatic variations, it provided a source book for artists and scientists alike, and, famously, was used as a reference by Darwin on his HMS Beagle voyage. It uses examples found in nature to clarify the differences between, for example, the Scotch blue found on ‘the throat of a blue titmouse’ and the Prussian blue seen on a Mallard Drake; the Smoke grey found around the red of a robin’s breast, and the French grey of the “breast of Pied Wag tail” (sic).

Yet with just 110 different tints, even this gorgeous but slender book has its limitations (and has since been extended). There is more, so much more, from which to choose. And as with any other description, we can risk over-doing it; when it comes to colour descriptions, a little can go a long way.

In honour of this theme, below are some uses of ‘colour’ in literature that relate also to the natural world. These work for me because they evoke a mood or clear image, convey a truth, or exhibit originality. Bearing in mind, too (as I have recently written here), I am personally not averse to a bit of purple prose…

“Soon it got dusk, a grapy dusk, a purple dusk over tangerine groves and long melon fields; the sun the colour of pressed grapes, slashed with burgundy red, the fields the colour of love and Spanish mysteries.” – Jack Kerouac, On the Road

“Green was the silence, wet was the light, the month of June trembled like a butterfly.” Pablo Neruda, Sonnet XL

“The redness had seeped from the day and night was arranging herself around us. Cooling things down, staining and dyeing the evening purple and blue black.”
― Sue Monk Kidd, The Secret Life of Bees

“The bougainvillea hung about it, purple and magenta, in livid balloons.”
― Anita Desai, Games at Twilight

“And we drove towards the widening dawn, that now streaked half the sky with a wintry bouquet of pink of roses, orange of tiger-lilies, as if my husband had ordered me a sky from a florist.” Angela Cater, The Bloody Chamber

“The moon hung low in the sky like a yellow skull. From time to time a huge misshapen cloud stretched a long arm across and hid it. Oscar Wilde, The Picture of Dorian Gray

Werner’s Nomenclature of Colours (1814) by Patrick Smye:
See a facsimile at http://www.clarityonthesea.org/files/pdf_archive/syme-1821-nomenclature%20colours.pdf  and the colours at https://www.c82.net/werner/#preface
If you like botanical drawings (as I do), you can look up some examples of Patrick Syme’s work on the National Galleries of Scotland website https://www.nationalgalleries.org/

23 thoughts on “Drink the rainbow”