Sure, there are more interesting ways to feel grubby but satisfied, but this is the one available to me at the moment. Spring cleaning, of course.

Yes, the clue is in the name; deep cleaning is generally a spring custom. The origins lie in the Persian (Iranian) New Year Nowruz, evidently, which falls on the first day of spring. A time for new clothes, renewing bonds, rebirth. But spring cleaning ready for autumn? I have blogged previously about how September feels like the real start of the year (here, The kinder September), so it makes sense to me. In any case, now is when I have time, a couple of days off before we set off again for another academic session.

But my apologies. Cleaning is a prosaic matter, not a subject for writing.

Yet physical labour can free the mind. And it has set me thinking. At one time, most people either had or were servants. The latter, of course, were the majority, and spent much of their day in manual or domestic labour. Yet, historically, fiction shows a dearth of such working characters. Largely illiterate, and worked to the bone all day, they had no opportunity to pen their own accounts.

Tess in Thomas Hardy’s Tess of the d’Urbervilles (1891) was poor, and I seem to remember a lot of laundry being done, the traditional Monday wash day at the Durbeyfield’s cottage as her mother multi-tasked cookery and childcare. Inevitably, given her class, Tess went into hired labour for employment (as had Hardy’s mother, Jemima, from the age of 13). 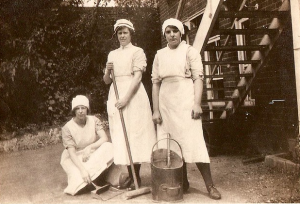 But here’s the rub; domestic servants rarely got much of a say in the 19th-century novel. Nelly Dean in Wuthering Heights, the housekeeper who narrates much of the novel, is an exception, with her fellow domestic Joseph much in evidence, but then those two stand as a sign of how the order of the ‘big house’ has broken down. Though the Victorian ‘sensation novel’ as a wider genre did give a little more time to servants­, perhaps because the authors were increasingly from lower middle-class backgrounds, with family in domestic service (like Dickens’s grandmother Elizabeth, who was a housemaid) or undertook household duties themselves (like the Brontes, working alongside their Cook/Housekeeper Tabby Ackroyd to keep the modest household ticking over).

In the 20th century, various housemaids and companions padded out the numbers of suspects in Agatha Christie mysteries — although the butler only ‘did it’ in one of her stories (or, at least, someone posing as a butler). I guess, too, that P. G. Wodehouse’s Jeeves and Wooster books gave prominence to the calmly insightful character of gentleman’s valet Jeeves, contrasting him with his posh and foolish master Bertie Wooster.

More interestingly, an exception is found in Virginia Woolf’s To the Lighthouse (1927) wherein the housekeeper, Mrs McNab, is charged with preventing the Ramsay household from falling into decline, holding back the forces of nature themselves. Though her Woolf acknowledges, too, the drudgery of domestic life as Mrs McNab stoops “creaking and groaning on her knees under the bed, dusting the boards.” Writer Henry Green, whilst born into an affluent family, depicted ordinary working life. His novel Loving (1945) is set in an aristocratic manor house, but it chiefly concerns the household servants, the internal politics and sexual intrigues of existence below stairs. Published in 1947 but set in the Edwardian era (1901-1910), Ivy Compton-Burnett’s Manservant and Maidservant also gives domestics as much prominence as those they work for, with the benefit of being able to eavesdrop, invisible to the privileged classes. Yet personally, I can think of few similar examples.

Some contemporary books set in the past have looked to rectify this earlier lack of interest. In the late 20th century, we started to become almost as interested in ‘upstairs’ as we were in ‘downstairs’—notably, after domestic service was no longer the social norm. Margaret Powell’s Below Stairs (1968, non-fiction) was, apparently, the inspiration for the BBC 1970s TV series ‘Upstairs Downstairs’, a forerunner of the more recent ‘Downton Abbey’, recounting Powell’s years as a kitchen maid and cook.

Kazuo Ishiguro’s Remains of the Day (1989), for instance, focuses on life below stairs, in the dying days of the ‘great house’ and servant / master hierarchy in the 1930s, with Mr. Stevens, the head butler of Darlington Hall, our narrator. Bethan Roberts’s A Good Plain Cook, set in 1936 but written and published in 2009, shows the Bohemian wealthy (a fictionalised Peggy Guggenheim and her young lover) through the eyes of Kitty Allen, young cook to the turbulent household. Jo Baker re-wrote Jane Austen’s Pride and Prejudice in Longbourn (2013) with a focus on the lives of the servants, particularly young maid Sarah, whose love-life echoes that of the Bennett sisters, with those ‘above stairs’ now forming the shadowy background characters.

For most of us, our ancestors would have been in some form of factory work, agricultural or domestic service. Mine, certainly. If we had lived one hundred, two hundred years ago, that would have been our likely fate. Servants slip in and out the background of so much fiction. I wish more of it had given, or at least would give, these people a voice.

11 thoughts on “Spring clean for September”